From an early age, we’ve been teaching AB about dragons.

My goal is to teach her that she can respond to scary things by being just as scary herself. I’m hoping to focus that on silly or imagined scary things (as opposed to, say, the danger of talking to strangers), but that’s probably going to be a difficult line to walk.

Anyway, for now, she’s too young to get any of that, but she does know about dragons. If you ask her what a duck says, she can tell you, and same for cat and dog and bee and fish (oddly enough), and right along with the rest, dragon.

Every now and then she’ll play dragon, too (usually at our encouragement). She’ll growl “Raar!” and T– will cry out, “Oh no, a dragon!” and then AB just goes wild, chasing her mom around the house and growling at her.

Recently, it occurred to me that, although she had the growl down pat, AB probably had no idea what a dragon was supposed to be. Her books and toys have lots of cats and dogs, but no dragons. So I decided to fix that.

I have a handful of books in my office with dragons on the covers, and plenty of pictures I’ve downloaded to use as illustrations on webpages or games I was working on. So I started introducing her to images, and — even though every artist’s rendering is a little bit different — it didn’t take long before she could recognize a dragon pretty much on sight.

Well, as part of that initial plan to introduce her to them, I wrote a quick email to E–, who is known to be a much better artist than her modesty will allow, and asked if she could be commissioned to make something for AB.

Yesterday, I received this in an email. 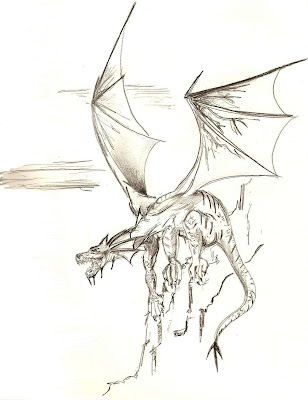 Anyway, as soon as I got home, I told AB, “I’ve got something for you!” but she was too busy running around the living room being crazy to care. So I pulled out my laptop (which caught her attention), opened my email to the picture and displayed it full-screen, and then turned it around to show AB.

Immediately, from across the room, she growled, “Raar!” and she stormed over to me, leaned in really close to stare at the picture, and the whole time she’s just growling away.

It was adorable. Big thanks to E– for her work on this (and to D–, who got AB a plush dragon toy, that she loves as well).

I’m proud of my little girl. She’s never yet played princess, but she has the dragon act down cold.

One Reply to “Dragon!”